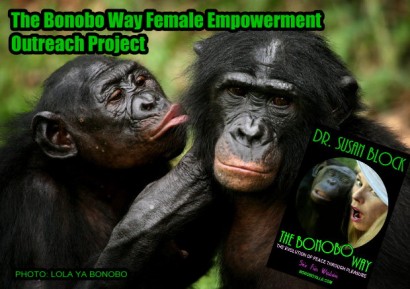 An insightful recap from Dr. Susan Block about the awardees of the Bonobo Way Female Empowerment Outreach Project. | #YearOfTheBonobo

The Suzys are coming! 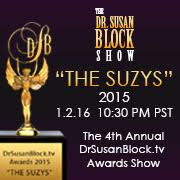 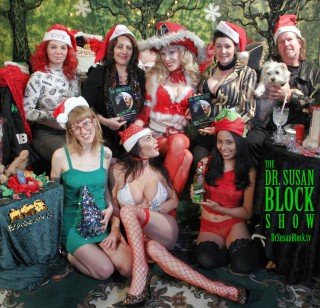 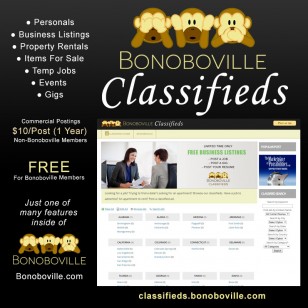 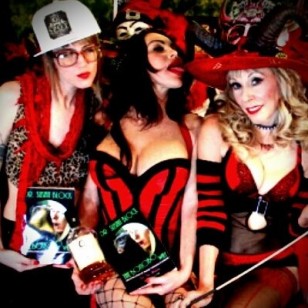 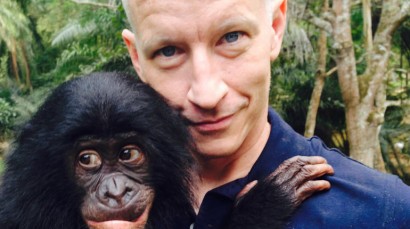 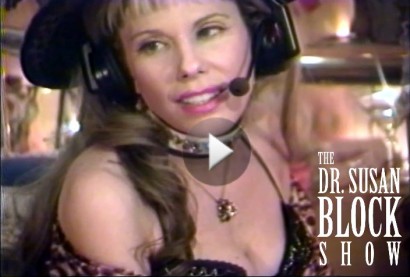 This Saturday night, December 12th, The Dr. Susan Block Show will explore fire and miracles, reality and fantasy, art and seduction, as we continue through the Holy-Daze, this show falling on the 6th night of Hanukkah, the Jewish Festival of Lights. Joining international sexologist and Bonobo Way author Dr. Susan Block live in-studio will be world-renowned VH1 Reality TV star and Kabbalist Kendra Jade Rossi, “Seduction Community” founder, teacher and “Speed Seduction” creator Ross Jeffries (in his second appearance on The Dr. Susan Block Show; his first was over 25 years ago when Dr. Block was on KFOX radio!), and the return of one of our favorite guests, the artist Helane. Having drawn dignitaries and Disney characters, from Charlie Sheen to yours truly, as well as our amiable and wise bonobo logo, Helane is also the author of A Drawing a Day.  Also in studio will be our beloved Dayton Rains—award-winning porn star as well as webcam and phone therapist with the Institute—and DrSuzy.Tv show producer Biz Bonobo, a.k.a. Elizabeth Aston. Also we hear that Best–Actor (Felix & Meira) and Best Pick-Up Artist (DrSuzy.Tv) award winner Luzer Twersky and perhaps some other surprise celebrity guests will be here!

“Hot-Wax Hanukkah, Seduction & Reality” will broadcast LIVE from Bonoboville on The Dr. Susan Block Show this Saturday night, December 12th, 2015, 10:30pm-Midnight PST. It can be viewed on DrSuzy.Tv or in Bonoboville where you can also chat live in the Bonoboville Studio.

Click Here to RSVP to attend this show in the “Speakeasy” studio audience or call 310.568.0066. Studio doors open at 9:30 pm. Studio Members FREE. Membership Has Its Pleasures.

The Dr. Susan Block Show is produced by The Dr. Susan Block Institute for the Erotic Arts & Sciences, an international center for sexual expression, therapy and education, based in LA, founded in 1991 by Susan M. Block, PhD, world-renowned Yale-educated sexologist, best-selling author and host of HBO specials. The Institute’s mission is to help individuals, couples and communities enhance their sexuality and improve their lives based upon Dr. Block’s philosophy of Ethical Hedonism and The Bonobo Way of Peace through Pleasure. A portion of all proceeds goes to help save the highly endangered “make love not war” bonobos from extinction in the Congo and to promote the Bonobo Way around the world.

This Holiday Season, GIVE THE BONOBO WAY! CLICK HERE TO READ OUR RECENT RAVE REVIEWS & INTERVIEWS

Make 2015 your Year of the Bonobo and get your copy of The Bonobo Way: The Evolution of Peace through Pleasure. 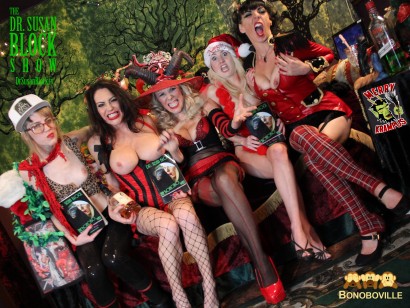 Seasons Beatings, Brothers and Sisters, Lovers and Sinners! The first Krampusnacht in Bonoboville is a raucous, racy, revelatory, spanking-hot, bonoboësque festival of KRAMPUS, the horned (and horny!) devil of medieval Alpine folklore and Hollywood movies. Krampus is the dark side of Santa Claus who looks a lot like that ancient Greek, half-human/half-goatish “God of the Wild,” Pan. While old Saint Nick brings joy and gives gifts to “nice” boys and girls, Krampus frightens, punishes, whips and spanks “naughty” children of all ages during the Xmas season, but especially on Krampusnacht, the night of December 5th, which just so happens to be when this show broadcasts live. And what better naughty woman-child (she’s 26 but looks sooo like jail-bait!) to consensually “punish” and play with than the adorable, articulate and erotically magical XxXmas Elf, Odette Delacroix.

But first, we take a minute to talk about the most recent high-profile mass-murders, which make Krampus look like an angel. Last week, it was a Planned Parenthood Clinic. The week before it was Paris. Now this week, it’s right in our own backyard: San Bernardino. The “war” has come home, my fellow southern Californians, this latest massacre of innocents brought to us by the Bonnie and Clyde of ISIS in America, “caught in a bad romance” (with a horny hat tip to Lady Gaga). “Clyde” (Syed Rizwan Farook) was a U.S citizen who apparently got radicalized and married “Bonnie” (Tashfeen Malik) in Mecca, not necessarily in that order. Then they settled down in Riverside, where he went back to work as a health inspector and she stayed home with the infant while the newlyweds legally amassed a military arsenal of assault weapons and ammunition and then went to war with…. San Bernardino? READ MORE…. DrSusanBlock.com 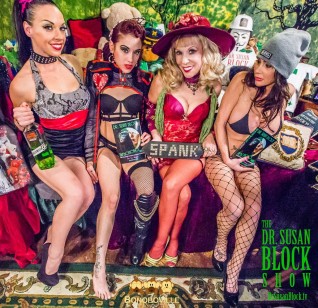 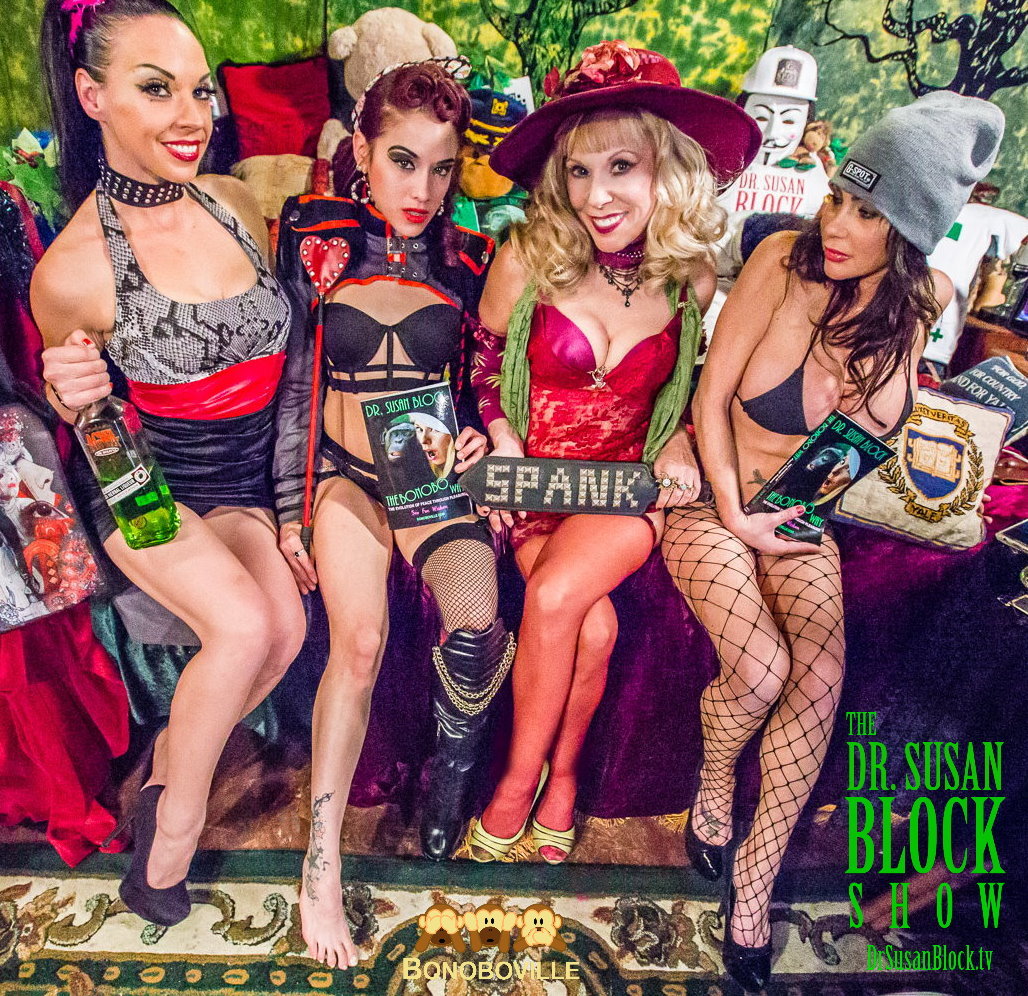 On Thanksgiving, let us give thanks for all we love. And on Spanksgiving, let us give spanks to all consenting adults who need spankings. And let us practice the Bonobo Way so we may find a way to stop killing one another. Let us learn from our bonobo sisters and brothers how we too might live in peace through pleasure… with a little spanking. And let us spank our hands together across a nice warm, willing, well-shaped ass, and let us say Amen. And AWOMEN.

Yes indeed, Brothers and Sisters, Lovers and Sinners, celebrating Spanksgiving on the Saturday night after Thanksgiving is an official Bonoboville tradition, almost (but not quite!) a religious ritual, and this bonoboësque, booty-ful show definitely spanks your twitchy cerebrum as well as your holiday bun-loving libido….